Chance at normal life for seven-year-old with epilepsy

Born with an epileptic condition, Nur Syuhada Sharen has been experiencing seizures since birth.

The seven-year-old from Melaka has now grown accustomed to the seizures and will alert those around her whenever she’s about to get an attack.

“She would make loud noises to attract our attention and we would rush to her side during her seizures,” said her father Sharen Abas, 42.

Sharen, a security guard, said his daughter was diagnosed with refractory epilepsy since birth and did not respond to multiple medications, causing her to have 20 to 30 seizures a day.

In 2015, she underwent her first surgery that helped reduce the severity and frequency of seizures.

“We were relieved to see some improvement but the seizures persisted at five to six times a day despite taking anti-convulsant medications.

“Her condition caused her to have development delay with slower personal management,” he said.

When Nur Syuhada was re-examined by the Paediatric Neurology Department in Hospital Kuala Lumpur in 2019, a deep-seated lesion in her frontal lobe was found to be the main cause of her current seizures.

“The hospital recommended surgery for Nur Syuhada to help her control the seizures and become more independent.

“Our heart sank when we found out that the surgery and hospitalisation would cost RM55,000,” she said, adding that with both their salaries, they could fork out only RM8,000.

On top of supporting their three other school-going children aged 10, 15, and 16, Sharen also supports his mother who has kidney problems. Siti Zubaidah is also paying for her own part-time studies.

Star Foundation will pay RM47,000 for the surgery and RM3,000 for the convalescence expenses using donations collected from cases supported previously under its Medical Fund programme.

Nur Syuhada, who likes singing and playing with soft toys, is scheduled to undergo the surgery at ADMC next month.

“We are extremely thankful to Star Foundation and donors for giving our daughter another chance for a normal life.

“We pray and hope for the best,” said Siti Zubaidah.

Established in 2004, Star Foundation is the charitable arm of Star Media Group and aims to deliver meaningful initiatives with lasting outcomes to a diverse group of beneficiaries. 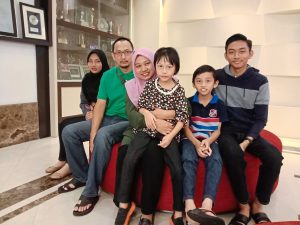 Nur Syuhada (on her mother’s lap) and her family during an interview at Menara Star, Petaling Jaya.