Survey shows Malaysians rely on radio for companionship during MCO 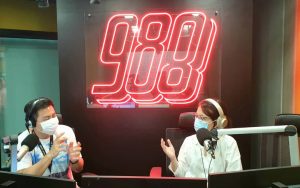 988 presenters continue to go on air during the MCO, adhering to SOP like wearing a mask. — 988

Malaysians are keeping their ears peeled to the radio especially during the movement control order (MCO).

A survey looking into radio consumption habits was conducted by GfK, a market research company, and Commercial Radio Malaysia (CRM), the association of commercial radio operators in Malaysia.

As a whole, some 97% radio listeners have continued to listen to radio during the MCO, despite the availability of other media options such as connected TVs and streaming platforms.

“Radio is an essential medium with a vital role to play during this time of uncertainty and disrupted routines, ” said Ozarizan Mohd Nor, president of CRM, in a press statement. “The current situation further amplifies our reliance on the mass media, and from the GfK study, it is evident that radio listeners rely on it for timely and trustworthy information.“

Indeed, the survey noted that 91% of respondents trust that radio gives them up-to-date information about Covid-19.

Being able to relate the radio presenters on a personal level also offer listeners a sense of comfort and community. Findings show that radio has provided listeners with a support system and companionship.

About 67% of respondents also agreed that listening to radio makes them feel more connected to the community.

Besides information on Covid-19, a variety of lifestyle content on radio have offered relief and lift the spirits of listeners. With 65% of respondents tuning into the radio for news, current affairs and politics during the MCO, it is the key draw for listeners.

Nevertheless, music playlist and song dedication sessions follow closely behind at 64%. Comedic elements in radio shows are another key reason, accounting for almost half of all listeners (46%).

Many listeners prefer to listen to the radio as they go about their daily routine such as when they are browsing the internet (87%), relaxing (85%), doing housework or cooking (77%), having their meals (75%) or working (58%).

Naturally, with most Malaysians staying home during the MCO, the survey showed that a majority of respondents (91%) consume radio at home. Three out of five people also said they have consumed more radio at home now compared to pre-MCO.

Digital savviness has become more important during MCO, which in turn, impacts radio consumption habits. Almost half of all respondents said that they are now listening to radio more on their mobile phones as a result of MCO.

Over half (57%) said they read or interacted with the social media pages of a radio station.

The top three reasons on why listeners engage with radio social media pages during MCO are to see the video and photos from a radio show and the announcer that helms it (72%), to read about, comment on music news and current affairs news (66%) and to share their personal experiences and photos (55%).

“As we grapple with the Covid-19 outbreak, radio’s ability to connect listeners with news, music, entertainment and community are the main driving factors of why radio will continue to stay relevant and draw audiences back for more, “ said Lee Risk, APAC commercial director for media at GfK.

“In fact, some 42% of respondents from the study already said they will consume more radio in the future, ” he concluded.