Known as the oldest bank to have a continuous presence in Malaysia, Standard Chartered Bank Malaysia Bhd has shown its commitment to the country by donating to the Star Frontliners Initiative.

The bank contributed RM150,000 to the fund that has enabled members of the public to support the work of medical frontliners during the Covid-19 pandemic.

The initiative under Star Foundation was launched by Star Media Group (SMG) to purchase medical equipment and other needed supplies for hospitals fighting the outbreak.

Fu thanked Standard Chartered for its support of the initiative, adding that it was encouraging to see corporations playing their part in the country’s battle against Covid-19.“It is heartening to see individual Malaysians and corporations alike being generous and helping each other during this period, ” he said.

He added that the Star Frontliners Initiative had raised more than RM2.5mil, which included Star Foundation’s RM1mil pledge.

“We have strong faith in the work that Star Foundation does, ” he said.

He said that globally, the multinational bank had pledged almost US$50mil (RM213.8mil) for Covid-19 relief and post-Covid-19 recovery efforts.

He noted that it was important for corporations in Malaysia to support the country’s fight against the disease.

“It started as a health issue, then it became a worldwide pandemic that caused colossal damage to the livelihood of many individuals globally, including in Malaysia.

“As a responsible corporate citizen, we realise that we cannot operate in isolation.

“If the community thrives, we thrive. So we have to support the community and reach out during emergency situations such as this, ” he said.

Abrar said Standard Chartered had also adapted to doing business in the movement control order period, such as focusing on digital banking and offering flexible working arrangements for its employees.

“The investment we have put in to become a digital bank is bearing fruit, ” he added. 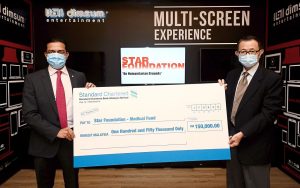 Helping hands: Fu (right) receiving a mock cheque from Abrar during a ceremony at Menara Star in Petaling Jaya.