YAKULT (Malaysia) Sdn Bhd, sponsor of the Kuntum Bersamamu Programme, donated 1,450 bottles of Yakult beverage as well as activity books and Kuntum educational magazines to the personnel at district police stations of Subang Jaya, Sungai Buloh and Gombak in Selangor.

The milk beverage brand, which is a strategic partner of Kuntum, handed over the donations through the company’s public relations and science deputy manager Chong Li Yi.

Chong said the donations were for the police and their families as police personnel were among frontliners who helped ensure public safety. 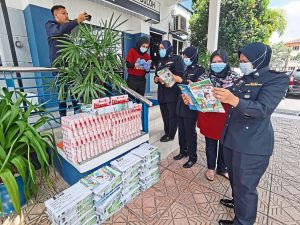 Police officers at Sungai Buloh headquarters looking at the Kuntum magazines that will benefit their family members. They also received Yakult drinks as a token of appreciation from Yakult Malaysia.