This is the second time that the state Health Department has received contributions from Star Foundation’s “Star Front Liners Initiative” to help frontliners fight against Covid-19.

The first time was in April where the foundation donated a total of 150,000 surgical gloves to the Queen Elizabeth Hospital.

“Thank you to all those who have contributed personal protective equipment (PPEs) throughout this period. We would not have made it this far without all of you,” she said after receiving the PAPR.

Dr Rundi said the PAPRs were important and useful as it could be reused and cleaned.

“We will distribute these PAPRs to other main hospitals in Sabah,” she said.

“However, we must bear in mind that it is not over, so it is important that all of us adapt to the new norms in life,” Dr Rundi said.

She added tht the Sabah Health Department was in the midst of developing district hospitals so that they could handle more patients and cases to avoid overcrowding in other major hospitals. 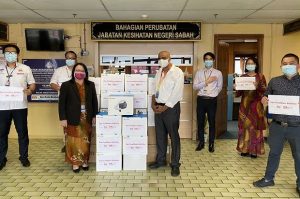