More than 800 people turned up for the star-studded event at TGV 1 Utama, including the stars of the film – the Malaysian national blind football team.

Eye On The Ball, which will be released in cinemas nationwide on March 19, tells the incredible true story of a group of young part-time blind footballers who rose to become Asean Para Games champions; and their quest to reach the “World Cup” of blind football.

Among those who were inspired at the gala was film and television producer Lina Tan who was impressed by the dedication of the players and the team’s coach, Sunny Shalesh.

“It was an emotional story to me, and it was amazing how the characters were so ‘real’ to me because they weren’t actors but real people. That’s the beauty of a documentary,” she said.

“The coach was one of my favourite characters, as he was like a father to the boys and it was clear that he cares for them.”

“These players have worked hard to achieve the dreams or targets they have in life and show the world their desire, commitment and passion,” he said.

“We need full support from the public to kick-start what the (underprivileged communities) need, and sports is one of the platforms for them to achieve more.”

The Eye On The Ball project is presented by R.AGE, Star Media Group and CIMB Foundation, one of the earliest supporters of the local blind football community.

The sport is played with players in blindfolds, who rely on their sense of hearing to follow a ball that rings when it moves, and they can dribble, pass and shoot with uncanny accuracy. National Blind Footballers include those featured in the Eye On The Ball film receive a standing ovation by the star-studded audience.

But for director Chen Yih Wen, a filmmaker and senior producer at R.AGE, the film is about so much more than footballing action, as it also reveals the deeply emotional stories behind several key players and coach Sunny.

It depicts how several key players overcame poverty and being marginalised due to their visual impairment to become unsung sporting heroes.

“I never had a blind friend until I met the football team and through their eyes, I was introduced to a world I didn’t even know existed,” said Chen.

“I witnessed the close-knit friendship and bonds they shared between them and how they managed to find light in the darkness.

“It was these qualities that drew me to them and drove me to tell their stories.”

The blind football team was brought together when Sunny founded the Pan-Disability Football Club to give young footballers with disabilities a chance at a better life.

“The team is an inspiration to all Malaysians. They show us what we can achieve if we work hard and with passion, and we are so proud to be able to tell their stories,” said SMG CEO Andreas Vogiatzakis.

“But this film is not just about inspiring people and creating awareness, as we will be donating a portion of the proceeds to the blind football community, so every person who watches the film in cinemas will be supporting Malaysian blind football.” 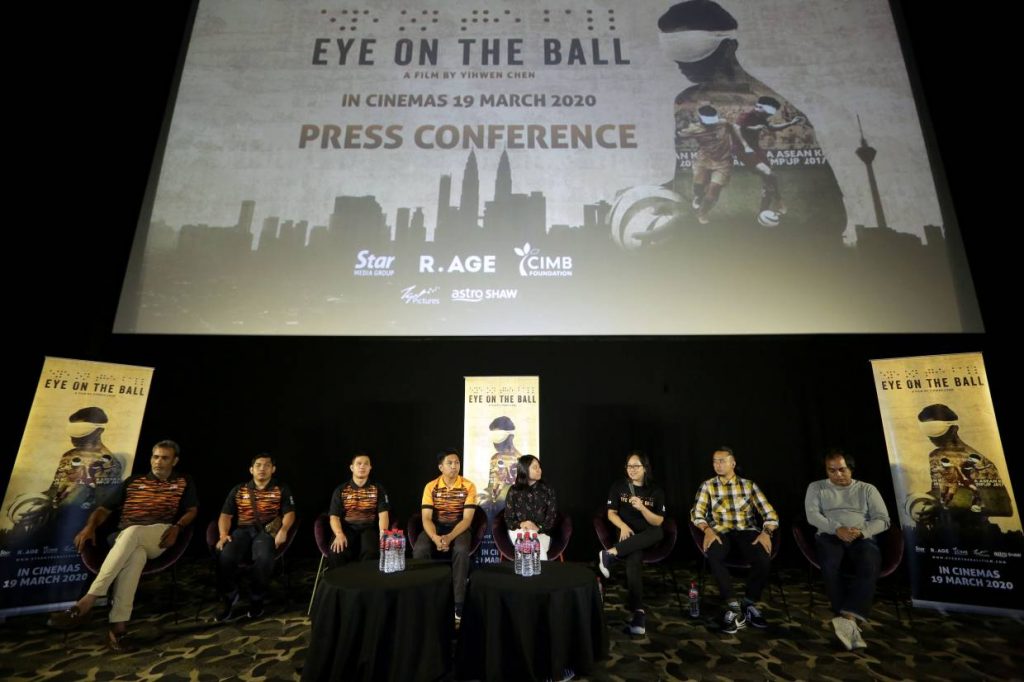 The main characters and Eye On The Ball production crews during the press conference after the gala premiere.

A portion of the film’s proceeds will be channelled to help the Pan-Disability Football Club continue its work in empowering lives through blind football.

“Sports is one of our foundation’s core pillars and we are especially passionate in developing grassroots talents with the aim to promote inter-communal relations, and provide avenues for the differently-abled to help them shine,” said CIMB Foundation CEO Datuk Hamidah Naziadin.

“We are delighted to have played a part in this ground-breaking documentary, and I am confident that the film will be an inspiration to all of us.”

The film had its international premiere last year in London, Manchester and Newcastle as part of the Aperture: Asia and Pacific Film Festival.

Eye On The Ball premieres in cinemas nationwide on March 19.

For more information, and to donate to the Pan-Disability Football Club, visit www.eyeontheballfilm.com