Surgery for boy with hole in heart

FIVE-year-old Danish Al ‘Aliy Fadzil has congenital heart disease since birth. He requires surgery to close a hole in the heart.

His father Fadzil Idris, 37, has to drive his family from Sitiawan, Perak, to the National Heart Institute (IJN) for his second son’s medical check-up.

“We were initially required to take him to the general hospital for medical check-up once a year only.

“Earlier this year during the check-up, we were informed by the doctor that Danish’s valve had become loose so he was referred to IJN,” said Fadzil, a foreman at the Manjung Public Works Department.

The surgery and convalescence expenses are estimated to cost RM50,000.

The cost will be covered by Star Foundation, using donations collected from cases supported previously under its Medical Fund programme.

When asked if they have concerns, Danish’s parents said they were worried about sending the cheerful boy off to surgery.

“Despite his medical condition, he is always smiling and enjoys playing with his siblings.

“He loves Thomas & Friends and would sometimes build his own railway tracks with household items.

“We do not want the surgery to take that spark away from him but we understand there are no other options,” said Danish’s mother, Nurul Diyana Salman, 29.

“Danish sometimes teases his brothers but they get along very well. He is quite a cheeky boy,” she said.

“We are worried, but with the financial aid we can focus on taking care of Danish before and after his surgery. We are most grateful,” said Nurul Diyana.

Established in 2004, Star Foundation is the charitable arm of Star Media Group and is aimed at delivering meaningful initiatives with lasting outcomes to a diverse group of beneficiaries.

The Medical Fund programme was started in 2015 to help underprivileged individuals suffering from chronic illnesses by sponsoring one-off medical treatment and care. 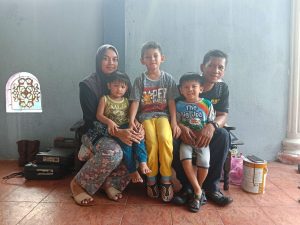 Danish (second from right) loves building railway tracks and playing with his siblings at the family home in Sitiawan, Perak.